Tornadoes caused significant destruction on the east coast of the United States, with one woman showing her home reduced to debris on Smith Island. 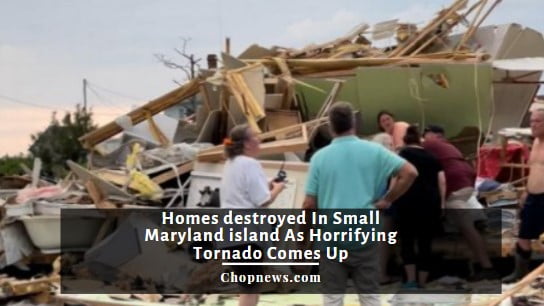 A house on the east coast of the United States has been photographed torn apart and left as a pile of debris after being destroyed by a tornado.

Severe storms in Maryland have produced waterspouts and tornadoes as a result of the area’s extreme heat and humidity.

And it has resulted in dramatic images of waterspouts – whirling columns of air and water mist – as well as flattened homes and buildings.

One of the most dramatic images was of a home on Smith Island that had been completely destroyed, with only the foundations remaining.

On Thursday, the home owner posted a video of the debris that was all that remained of her Rhodes Point home.

On Thursday evening, the National Weather Service issued a Special Marine Warning for the Chesapeake Bay and Tangier.

“Somerset County is reporting that a waterspout landed onshore, causing significant damage on Smith Island,” he tweeted. We are prepared to assist with the local response.

“Our emergency management team is monitoring the storm damage and coordinating with local jurisdictions.” There are currently over 50,000 power outages. Please stay off the roads in affected areas, particularly where tree-clearing crews are needed.”

One person posted a photo of the threatening storm with the caption, “I just found out that it was a tornado that made landfall.” I hope everyone is safe. Just a minute ago, there was a water spout near Smith Island.”

One video showed a waterspout moving across a bay, tearing up everything in its path, while people screamed in the background.

The force of the wind knocked down trees in Baltimore, and there was flash flooding with images of cars under water.

There was up to four inches of rain, and Mayor Brandon Scott reported that 65 trees had fallen and 18 were blocking roads.