The New York Times columnist David Brooks is known for his conservative political commentary and his cultural perspective. He is also an editor of Backward and Upward, Chair of Weave: The Social Fabric Project at the Aspen Institute, and an author of Bobos in Paradise.

Columnist at The New York Times 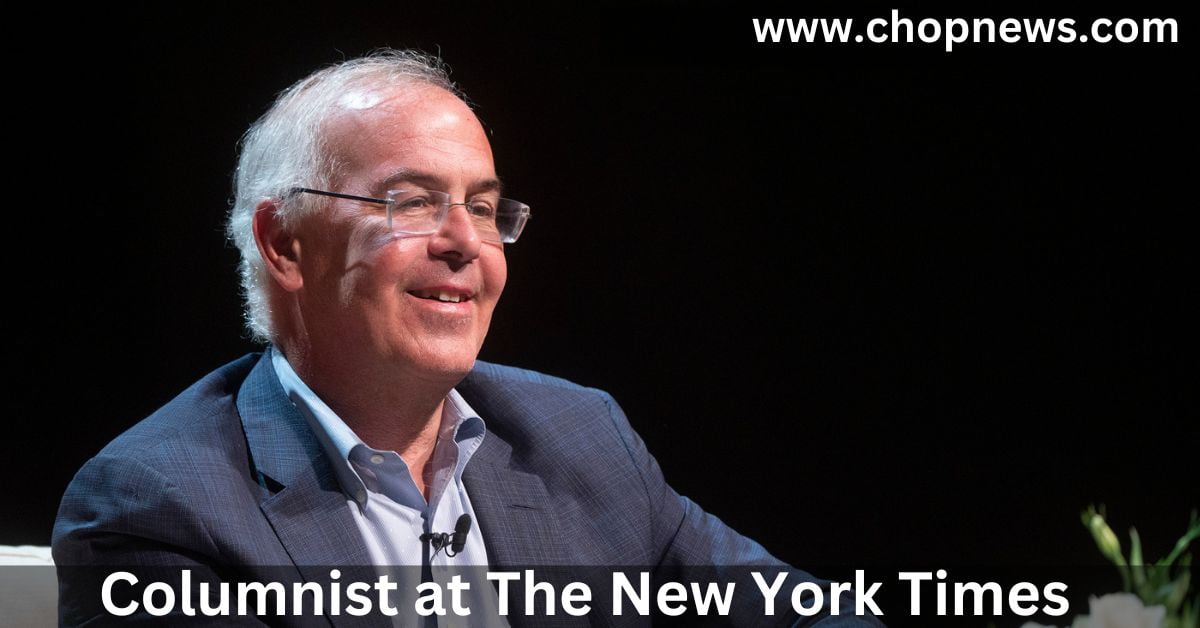 As a self-described nerd, I have long considered myself a connoisseur of the media.

In recent years, I’ve been a bit more curious about the people, organizations and products behind the scenes.

So, when I heard that David Brooks was a columnist for the esteemed New York Times, my curiosity was piqued.

As it turns out, the former media tycoon was just a regular old guy, not to mention one of the most well-received and quotable journalists in the business.

During his illustrious career, he has written articles for many major publications, including The Washington Times, The Wall Street Journal, Newsweek and The New Republic.

Notable achievements include his stint as the senior editor at The Weekly Standard when it was launched in 1995, his contributions to the Times’ opinion page and his stint as a foreign correspondent. He currently serves as a professor at Yale University.

Brooks has a knack for making a good cup of tea. And he’s also a good writer. If you haven’t checked out his oeuvres, I suggest you get to it.

Author of Bobos in Paradise

David Brooks is a cultural commentator, sociologist and author. He writes for The New York Times, the Atlantic and the Wall Street Journal. His essays often present a nuanced view of contemporary American life.

One of his books, Bobos in Paradise, explores the rise of a new elite class in America.

Known as bobos, this upper class of Americans has combined the best attributes of the hippie movement with the entrepreneurial energies of the eighties.

Bobos in Paradise was published in 2000. David Brooks coined the term “bobos” to describe this new class.

He wrote the book to explain how this new class had risen to the top.

It was not a utopian vision, but an analysis of the behaviour of a new class of educated Americans.

Bobo is a portmanteau for “bourgeois bohemians”. They are a new, affluent social group. Often associated with aversion to conspicuous consumption, bobos are not unlike previous elites.

However, a bobos lifestyle is not just a matter of good taste. Bobos also adopt a number of spiritual beliefs.

And they have their own code of rules. This type of culture is psychologically unhealthy.

Editor of Backward and Upward

David Brooks is one of America’s most prominent conservative commentators. His work, which often deals with politics, culture, and the economy, has appeared in several major publications. Currently, he is an op-ed columnist for The New York Times.

He also contributes regularly to The NewsHour with Jim Lehrer and NPR’s All Things Considered. In addition, he is an advisor to the board of trustees at the University of Chicago.

Born in Toronto, Canada, David Brooks moved with his family to the Philadelphia suburbs when he was 12 years old.

He attended Radnor High School and graduated with a degree in history from the University of Chicago.

After graduating, he worked as a reporter for The Wall Street Journal and as a police reporter for the City News Bureau of Chicago. Later, he edited the paper’s book reviews and opinion page.

Before joining The Washington Times, Brooks wrote editorials and movie reviews for the newspaper. He is a frequent analyst on NPR’s “All Things Considered.”

He is an adjunct professor of public policy at Duke University’s Terry Sanford Institute for Public Policy.

Chair of Weave: The Social Fabric Project at the Aspen Institute

David Brooks is a best-selling author, journalist, and contributor to The Atlantic and The Weekly Standard. He is currently a staff member at Aspen Institute, where he leads Weave: The Social Fabric Project.

Brooks has been a regular contributor to The New York Times, where he writes a column called A Nation of Weavers.

His columns often examine issues of democracy, culture, and politics. In addition to writing for The Times, Brooks has appeared on PBS NewsHour and NBC’s “Meet the Press.”

As the executive director of Weave: The Social Fabric Project, Brooks is leading a project that helps grassroots leaders create social trust and weave an inclusive, welcoming social fabric.

According to The New York Times, Brooks is being scrutinized for his ties with outside groups. Last month, Brooks wrote a blog post for Facebook’s corporate blog.

What Happened To Rapper Gnuk and Bosstop? [Know Everything]