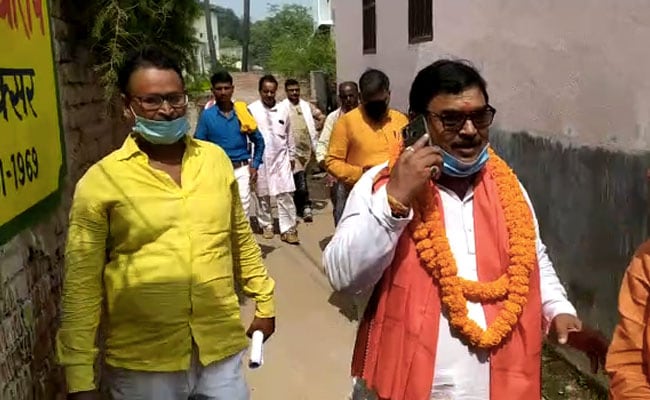 Bihar Election 2020: Parshuram Chaturvedi is the BJP’s candidate from Buxar.

Former Bihar police chief Gupteshwar Pandey, who quit his job last month and announced his political debut, has missed out on the chance to contest the approaching state election. He had made it clear that he wished to contest the polls from Buxar, his home district, as a candidate of Chief Minister Nitish Kumar’s Janata Dal United.

The man who has been chosen to contest from the seat is a former Bihar police constable. Parshuram Chaturvedi, the BJP’s candidate from Buxar, is better known as the man who knocked off the “DGP” (Director General of Police) from the race.

“The DGP is my elder brother. I touch his feet in reverence and have nothing but affection for him,” Mr Chaturvedi told reporters today, thanking his party BJP for choosing him.

Mr Chaturvedi said during his days in the Bihar police, he worked in several departments, including the Criminal Investigation Department (CID) . “I was respected everywhere I worked. I was known to be diligent and sincere,” he said, adding that the experience had helped him in politics.

Asked whether he was confident of winning, the former cop flashed a victory sign.

Gupteshwar Pandey had taken voluntary retirement from the police force and joined Nitish Kumar’s party. Yesterday, his name was missing from the list of JDU’s 11 candidates for the Bihar election starting October 28.

The ex-police chief may have anticipated a better reward for his role in the Bihar government’s push in the Sushant Singh Rajput investigations. On the day of his retirement, a video lionizing him as “Robinhood Pandey”, a public hero, was also strategically released.

Outwardly, he took the poll snub on the chin.

“I am upset with the phone of many of my well-wishers. I also understand their anxiety and troubles. After I got free, everyone expected that I will contest the election but I am not contesting assembly elections this time. There’s no such thing as being frustrated. Be patient. My life has been spent in the struggle,” Mr Pandey wrote in a Facebook post.

“I will be serving the public all my life. Please be patient and do not call me. My life is dedicated to the people of Bihar. I bow down to the land of my birthplace Buxar and to all the elder brothers, sisters, mothers and youth of all the caste and religion! Keep your love and blessings,” he said.