The party known as Adrian’s kickback in Huntington Beach, California, was an epic night for many people. While the celebration started as a birthday party, it became the stuff of legends. It turned into a wild, rowdy party that led to 149 people being arrested. And it was just the start of an onslaught of copycat parties.

149 people were arrested at the party 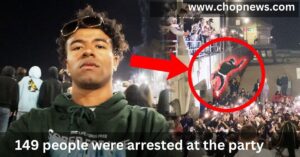 Almost 150 people were arrested in Huntington Beach, California, on May 22 and 29 after attending the Adrians Kickback party. Police arrested 121 adults and 28 juveniles for curfew violations, vandalism, and failure to disperse.

The party was supposed to take place in a fire pit in Huntington Beach, but it was canceled due to the massive number of people that showed up. Authorities also enlisted the help of other agencies to keep the crowd under control.

Several videos from the party have circulated online, and they show attendees jumping off the lifeguard tower and setting off fireworks. People also threw rocks and bottles at police officers.

While no major injuries were reported, many attendees vandalized local businesses and other property. A lifeguard tower was damaged by fireworks, and some downtown businesses were destroyed.

A viral party in Huntington Beach, California, dubbed the Adrian’s Kickback, has caught the attention of the local authorities. The event has generated a plethora of tweets, Facebook posts, Instagram shots and YouTube videos. However, the hype lasted only a few hours before authorities were forced to impose an overnight curfew.

While a lot of attention has been paid to the massive amount of arrests that took place at the event, there are a few facts that may be overlooked.

The most impressive of these is the fact that the party was thrown by an average high school student. Despite the fact that he invited over 2,500 people to the event, he was only responsible for a fraction of those attending.

This, coupled with the fact that the venue was unknown, contributed to the event’s unpredictability.

adrian’s party host was not from Huntington Beach

On May 22, more than a thousand teenagers converged on Huntington Beach for a party hosted by TikTok star Adrian Lopez. They were all there for his 17th birthday.

The party was organized via TikTok and other social media sites. A video of the event went viral. It also caught the attention of authorities in Huntington Beach.

More than 100 arrests were made on Saturday night. People were charged with firing illegal fireworks and failure to disperse. Other charges included curfew violations and vandalism.

Many of the teens who attended the party did not know each other. However, they had been encouraged to do so by online influencers. Some said they had flown in from other states to watch the spectacle.

Police said the party had been an “uncontrolled” gathering. This is because the partygoers threw debris at police and set off fireworks. Eventually, police resorted to using non-lethal rounds on the crowd.

The internet was all abuzz with the news of the Adrian’s kickback party in Huntington Beach, California. Over 2,500 people showed up to celebrate the birthday of a young TikTok star. Some claimed to have traveled hours to get to the event, while others flew in from out-of-state.

The event drew an array of celebrities. People joked that the event was like Coachella. It even got some attention from a bejeweled rapper named Lil Uzi Vert.

The party was organized via online sites, including TikTok. One friend of the teen, Yahir Fernandez, promoted the party through the social networking site.

There’s no denying that Adrian’s kickback on Huntington Beach was an event to remember. It may have been the biggest party in Huntington County history, with more than 1,200 attendees, but its genesis was in the social media sphere.

The resulting buzz inspired a slew of copycat parties in various locales, including Hawaii and Washington state. And, according to the Huntington Beach Police Department, there’s no hiding the fact that the aforementioned affair deserved a fair share of the cops’ attention.

What started out as a sandbox swarm erupting with unbridled enthusiasm ended in a scuffle, a snafu and an inability to keep it all under control. This is not to say that it was a smooth experience, but it’s hard to say that Adrian’s bday bash was a flop.

Who is Jaxxyn Wood & What was His Cause of Death?