It’s hardly surprise that NBC renewed the crime thriller The Blacklist season 10 because its combination of suspenseful storylines, brisk direction, and excellent performances has kept it going as strong today as it did when it first aired back in 2013.

Here is all the information you need to know about The Blacklist season 10. Get more updates on chopnews “The run has been fantastic. It’s difficult to think that this all began in 2013. With the exception of the pilot, I have been a part of the show from the beginning. We are overjoyed to be back for a tenth season, which will begin production after Labor Day.”

The first Monday in September—the fifth in 2022—is Labor Day, which falls around the time when season nine’s filming got underway last year.

If the production schedule holds true, the premiere of season 10 of The Blacklist might air in October. The show typically shoots episodes and releases them all at once.

We’ll cross our fingers for you. 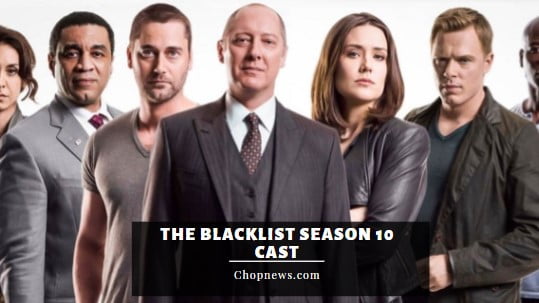 Fans can only wonder who will return for season ten after viewing the suspenseful season nine conclusion.

We would naturally anticipate its star and executive producer James Spader to return as criminal mastermind-turned-supergrass analyst Raymond “Red” Reddington, even though no one has been officially confirmed as of August 2022.

Regarding the other key players, we would anticipate comebacks from Donald Ressler (Diego Klattenhoff), Harold Cooper (Harry Lennix), and Dembe Zuma (Hisham Tawfiq).

Amir Arison, who made his television acting debut as FBI Special Agent Aram Mojtabai in the show’s first season, and Laura Sohn, who joined in season six as FBI agent Alina Park, are two prominent cast members who regretfully won’t be returning for the next installment.

According to reports, Arison is relocating so he can perform in The Kite Runner on Broadway, an opportunity he claims he “could not pass up.” Sohn is moving on to work on unspecified projects in the meantime, but they are not yet known.

Arison wrote a lengthy letter on Twitter stating, “The Blacklist has changed my life – I have made lifelong friends, learned so much along the road, and have met numerous beautiful individuals from all over the world who support the program.”

It is not lost on me how fortunate I am to have had the opportunity to work and develop in a role for nine years with such a remarkable cast, crew, and group of committed artists.

Even though Arison is leaving, the door is open for him to make cameos or even a full comeback in the future as his character’s exit story is that he is leaving the FBI and moving to Brooklyn – the finale even had a nod to his next project by saying that he might see a Broadway show while in New York – and his character is stepping away from the FBI and moving to Brooklyn. Although the season’s premise is still being kept a secret, the season nine finale provided viewers a very clear sense of the course the season will follow.

By the end of the season, we learned that Red’s beloved Elizabeth was killed by his ostensibly devoted advisor Marvin Gerard (Fisher Stevens) (Megan Boone).

However, despite being discovered and dying as a result, he still left Red with one final favor, much to Red’s misfortune.

When Marvin ran across Wujing (Chin Han), one of the original Blacklisters from season one, in prison, he explained that he was apprehended because Red and the FBI were cooperating, and then handed him a list of other people Red assisted in putting away.

Wujing is now out for blood, equipped with a list of additional Blacklisters he intends to enlist to help him track down and kill Red.

It appears like Red will be obtaining payback in season 10 just as his quest for vengeance is coming to a conclusion.

Without a release date, there is no trailer.

You’ll learn about our update here first, so keep an eye and ear out for it.

The UK release of The Blacklist, which airs on NBC every Friday, is still pending.