10 Best Romantic Movies of Hollywood: IMDb, OTT Platform, & More: Here in this article, you will see romance blending with thrill, comedy, action, drama genres, as we are listing one of the best Hollywood romantic movies that have been made over the years, these movies will make you cry, laugh, and believe in literal love.

We have distilled some of the best romantic movies with high IMDb ratings which also has rocked the Box Office at the time of their release, you can easily find these movies on the Over The Top(OTT) platforms like Netflix, Amazon Prime Video, Disny+Hotstaar, etc. 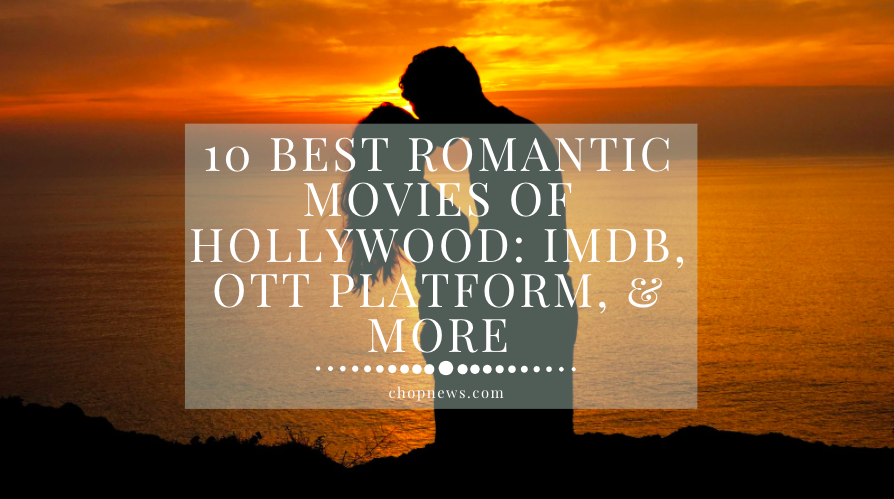 This romantic sci-fi film was released on 19 March 2004 and became the worldwide critically acclaimed and box office success film, so much so that it got two oscar awards in the category of best original screenplay and actress. With an IMDb rating of 8.3/10, it comes on the top spot of our best romantic movies.

It stars Jim Carrey, Kate Winslet in the main lead actors role. Helmed by Michel Gondry and the screenplay were written by  Charlie Kaufman. It is available on the leading streaming platforms Netflix and Amazon Prime.

The Notebook is set in the 1940s where a couple Noah Calhoun and Allison Hamilton played by Ryan Gosling and Rachel McAdams respectively fall in love with each other. It has an IMDb rating of 7.8/10 and is available on the OTT platforms Netflix and Amazon Prime.

It was released in the year 2004 and gained a cult following, it was a sleeper hit film. It stars Ryan Gosling as Duke and Rache McAdams as Allie. The Notebook was made on a budget of 29 million dollars and grossed an overall 117.8 million dollars worldwide.

Joe Wright‘s directorial, this romantic war drama tells the story of a crime and its ramifications over the period of six decades commence from the 1930s. It was released in the year 2007 and was a commercial success and also got several accolades including an academy award in the category of the Best original score.

The IMDb rating is 7.8/10 and you can find it on the streaming service Netflix. Dario Marianelli has given the music in the film.

Titanic is a romance-disaster film written and helmed by James Cameron, he also backed the film with Jon Landau. It is set in the year 1912 based on the giant ship RMS Titanic in which’s maiden voyage Jack and Rose who hails from different social classes, falls in love. It has an IMDb rating of 7.8 out of 10, it was released in the year 1997 and received many awards at the film festivals including the academy awards.

Titanic has so many records i.e it was the first movie that grossed the 1 Billion dollars mark at the box office worldwide, the most expensive movie of that time, the most academy award aka Oscar awards nominated movies, etc. It stars Leonardo DiCaprio and Kate Winslet as Jack Dawson and Rose DeWitt Cemetery.

Susan Johnson’s directorial To All The Boys I’ve Loved Before is a teen romantic comedy, it revolves around a high school shy girl Lara Jean who writes letters to those boys whom she wanted to be her boyfriends. It is available on Netflix and has an IMDb rating of 7.1 out of 10. It stars Lana Condor, Noah Centineo, Janel Parrish, Anna Cathcart in pivotal roles.

It is a romantic drama that revolves around a woman Tish and her wrongly charged lover Fonny, the film follows the story of Tish and how she managed to prove the innocence of her lover before the court. The IMDb rating is 7.1/10 and you can watch this multiple accolades-getter films on the giant streaming platform Netflix.

Directed and Screenplay was written by Barry Jenkins. Kiki Layne performs the role of Clementine Rivers aka Tish and Stephan James as Alonzo Hunt aka Fonny.

With an IMDb rating of 7 out of 10 this romantic drama comes on the no. 7 spot of our best romantic movies, it is based on the novel One Day written by David Nicholls. It is backed by Nina Jacobson and made under the banner of Random House Films with the collab of Film 4 Productions and Color Force. It was made on the budget of 15 million dollars and did the business of 59 million dollars at the box office worldwide. Available on Netflix.

The Proposal is available on the leading OTT platform Hotstar, it revolves around Margaret Tate who is an editor at NY city book publisher and also a Canadian executive who is about to face deportation from the country on the account of her expired visa, further in the film she convinces her assistant to act as a fiance for retaining her job of editor.

It was a commercial success film, stars Sandra Bullock and Ryan Reynolds as Margaret Tate and Andrew Paxton. Available in Disney+Hotstar.

days. It is available on Netflix and has an IMDb rating of 7 out of 10. It was made on a budget of mere 7 million dollars and grossed worldwide around 190 million dollars.

It stars Richard Gere and Debra Winger as the main lead, helmed by Taylor Hackford and bankrolled by Martin Elfand and Douglas Day Stewart under the banner of Lorimar Productions.

Julia Roberts starred in Notting Hill romantic comedy released in the year 1999. It revolves around Julia, who is essaying the character of a famous American actress who would walk into the shop of Grant, from where the romance of both brews. Notting Hill was a commercial success film and is available on the streaming service Amazon Prime. IMDb Rating 7.1/10. Roger Michell helmed the project and was backed by Duncan Kenworthy.