Top 5 cryptocurrencies to watch this week: The cryptocurrency market has been seemingly untradable in the past week. Led by bitcoin, most cryptos prove that investors are unsure of what will happen next in the market, as a lot of macro-economic factors could pull the tokens either way. Due to its direct correlation with the S and P 500, traders have opted to look at the S$P 500 to have a grasp of what to expect in the crypto market.

A few things to note are:

This news and others, sum up a negative bias as the notable index used to check the level of bullish and bearish sentiment, the Fear and Greed Index, jumped back into the extremely fearful zone.

We could see some buying pressure on Bitcoin at lower levels, but the general belief is that it is set to drop. If the bulls can get a firm hold of Bitcoin at lower levels, we could see altcoins rally. While this article does not look to make price predictions (you can get the chainlink price prediction 2022 here. It will guide you on some of your next trading moves. Let’s look at some of the top cryptocurrencies and how their charts are primed against bitcoin.

Bitcoin has struggled to make a sustainable recovery after breaking below the perceived support at $40,000 on April 22nd. The inside-day chart patterns that appeared throughout late last week suggest there is still some indecision among traders as they wait for clearer direction from either side of this market movement. Though it seems a safe bet now due to scalp trading techniques, it might just be worth looking into again. 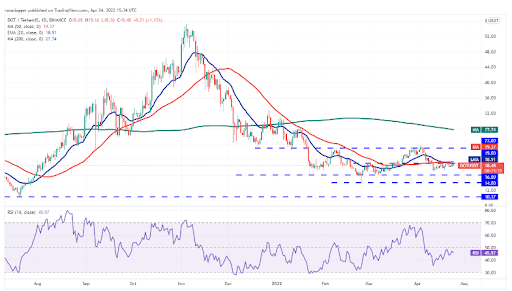 Looking at the 20-day EMA of $41,150, you will notice a slope with the relative strength index hovering in negative territory. This shows that the downward trend in this pair is not over yet, and this is still a seller’s market. All eyes are on the $39,000 mark as we could see 2015-esque drops if we go below this mark. The bulls should take up positions here, though, and prevent any further capitulation.

Apart from its entrance into this position, traders will lookout for how it reacts after it hits the $39,000 mark. If there is a strong rebound, then it will depict a stronger buying pressure at lower levels. To get off this correction-like trend, the bulls will need to sustain this buying power till it reaches the $41,500 mark.

In the same way, if it hits the $39,000 mark and goes lower, we could look at the low $30,000. With the four-hour charts showing strong push-pull pressure at the $39,000-$39,900 mark, we can infer that the bears are trying to turn the $40,00 support level to a resistance level. See the volume and price changes from the bitcoin blockchain explorer.

A brief look at the polkadot token shows it has been hovering around the $19 resistance level. We can concede that the bears have successfully taken this level, but looking at the other side of the coin, the bulls have given up little ground too. 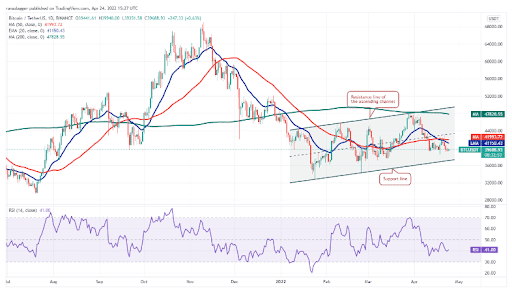 Although the bears might have a minor edge if we check the 20-day EMA, further analysis shows that if the price drops below $19, it will go all the way to $16.

To show that the bulls are not out yet, a push above the $19 SMA might prove devastating for bears. It will go all the way to the $23 resistance.

Looking at the 4-hour chart shows the same trend of bull-bear fragility.

Monero shows a different setup to polka and BTC. There is hope that we will touch the $300 mark, after the token corrected a bearish move to hit $290 around April 22. 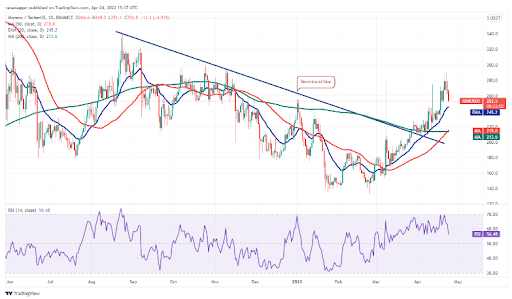 We could touch the $340 mark if the buying pressure continues, but before that, there is a probability we go to the $245 support. The strength of its rebound from this spot will show how much buying power exists in this token. 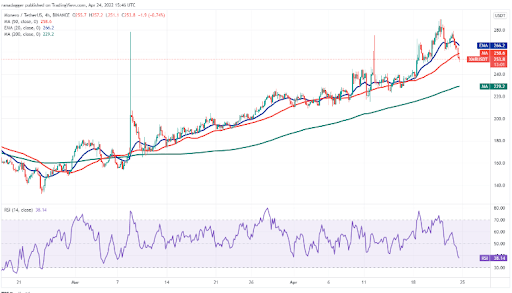 ApeCoin (APE) had a bull-bear pull recently, but its current status shows that things have gone in favor of the bulls.

As seen from its run-up from its 20-day EMA of 13.6 to hit the $18.4 resistance, there is little doubt to disprove the bulls being in command. The $18.4 resistance has proven strong and the APE token has bounced back from it a couple of times. If the price finally breaks this resistance level, we could run up to $20, or even to $24. 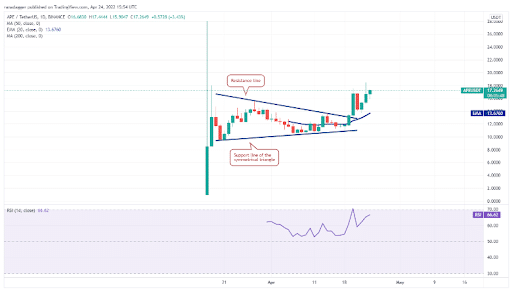 The token of the decentralized exchange had a short bounce from its downtrend. This shows that bulls successfully got the resistance line flip to be the new support line. We have gone over the 20-day EMA, and the next goal is to touch the 200-day SMA at around $11.5.