The Sandman travels with Dream of the Endless as he sets out to rebuild his kingdom after being imprisoned for more than a century and encounters some of his previous demons along the way.

‘The Sandman’ Explained: Who is Nada? 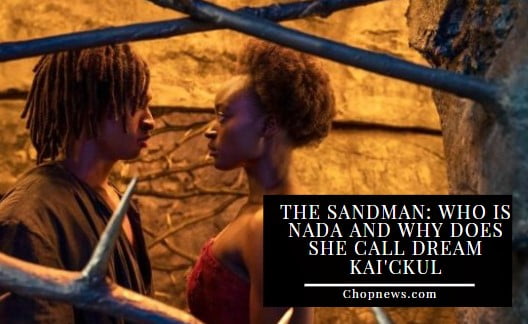 Nada (Deborah Oyelade) is one such individual. She makes a brief appearance in the fourth episode of the series, “A Hope in Hell,” which is also the chapter in which the character first appears in Neil Gaiman’s original comics.

Here is everything you need to know about the character, including the origin of the nickname Kai’ckul and the reasons why she perceives Dream differently than other people do.

Nada, the queen of a tribe known as the First People, was one of Dream’s true loves. She first encountered Dream 10,000 years before the events of the episode in which she first makes an appearance.

The first chapter of her and Dream’s love story is detailed in the introduction of The Sandman’s second volume, “The Doll’s House,” which the second half of the Netflix series is based on. Nada refers to Dream as Kai’ckul, one of the many names Dream adopts like Morpheus.

An elder of the First People tribe tells a young man in this prologue, titled “Tales in the Sand,” the tale of Nada and how she sought out Kai’ckul, the ruler of Dream, when they first saw each other and eventually met him in the Dreamrealm.

When Nada learned that Dream belonged to The Endless, a race of immortal beings that cannot perish, she confessed her love to him there but, out of fear that they could not be together, she fled back to the mortal realm.

She encounters Dream, though, and he offers to make her the ruler of the Dreamrealm. He persuades her to stay with him, but their love results in the meteor that wipes out her people, and Nada realizes they can’t be together.

Dream follows Nada into the domain of Death to ask her to rule the Dreamrealm with him once more after she rejects his invitation to be his queen by committing suicide. Dream decides to punish Nada after her third refusal by sending her to hell, where she has remained ever since.

Instead of adapting this prologue, the Netflix series merely reproduced the scene in “A Hope in Hell” where Nada asks Dream to set her free after seeing him for the first time in ages.

Because Dream can change aspects depending on who is looking at him and does not always appear in the form he is most frequently depicted in both the comics and the series, Ernest Kingsley Junior is used in this scene in place of Tom Sturridge. In fact, Dream is depicted in the comic as a cat to another feline in one chapter.

Later on in the episode, Sturridge’s Dream introduces Nada to Matthew the Raven (Patton Oswalt) and reveals their romantic relationship. When Matthew inquires as to why Nada is in hell, Dream only responds, “She defied me,”

Showrunner Allan Heinberg told Newsweek that Dream and Nada’s journey is so crucial to this later arc that he believed the prologue to “The Doll’s House” would better serve a second season of The Sandman. Dream and Nada’s story continues in the comics’ fourth book, “The Season of Mists.”

“Well, for me, that is such a significant element of the next arc, which is “Season of Mists,” it made more financial sense to use “Tales in the Sand” as part of Morpheus’ “Season of Mists” journey,” Heinberg said in an interview with Newsweek.

So if we make it to season two, we want to be able to fully recount their love story as a part of the “Season of Mists.”

The entire The Sandman is now available on Netflix.

Michael “Micky” Hourihan Died: Know How Did He Died

Project X True Story – Based On A True Event