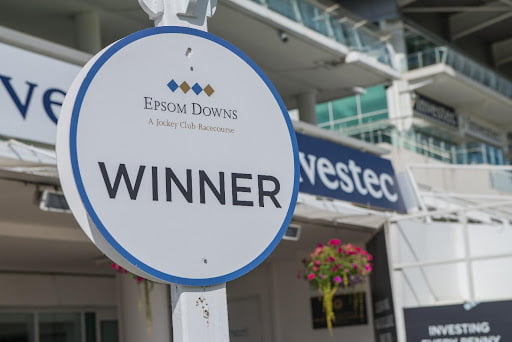 Fireworks at Epsom as Desert Crown wins the 2022 Derby: There were fireworks on and off the track at Epsom Downs on Saturday afternoon, as the iconic racecourse’s grandstand was, somewhat controversially, lit up in colour from an array of pyrotechnics as the horses were squeezed into the stalls on the far side of the course before Desert Crown set off more explosives when he turned on the burners to race for him and win the prestigious Derby in some style.

Made the short-priced ante-post favourite at a general 15/8 in the horse racing betting after impressively winning the Group 2 Dante Stakes at York in May, beating Royal Patronage by over three lengths, Desert Crown drifted out to around 3/1 on the day of the race — but the bookies were left with egg on their face as the Sir Michael Stoute-trained horse bowled home with ease.

There may have been some concern amongst backers of the favourite before the one mile, four-furlong contest as the three-year-old was starting to sweat quite a bit — which certainly wasn’t helped by the rash decision to let off those pre-race fireworks — but he proved his worth as they came around Tattenham Corner and down the hill of the helter-skelter-like course.

Shaken up and kicked into gear by jockey Richard Kingscote three furlongs out, Desert Crown began to make smooth headway at the fore of the field and by the two-pole, he was pushed into the lead.

The three-year-old drifted left, but was clear a furlong out and he kept on well against the rail to win by a comfortable two-and-half-lengths clear of 150/1 outsider Hoo Ya Mal to land Stoute an impressive sixth Derby triumph and a first win in Britain’s richest flat race in 12 years.

“We were very hopeful after [his win in the Dante Stakes at] York that he might win the Derby,” Stoute, who simply lifted his top hat in celebration when his now legendary colt crossed the line, said, “but the performance delighted me, because he had it won a long way out.

“He’s got such a good mind to go with his ability. At an early stage [of his career] he was having little niggles and that’s why he didn’t run until the back end of last year. It was nothing serious, but he was maturing and developing.

“I was very happy with his position when he got to the top of the hill, he travelled, he’s a good athlete and he floated down the hill.”

Kingscote, whose near prefect ride is one that the late Lester Piggott — who this year’s renewal of the Derby was run in memory of — would have taken pride in, added: “Turning in, he was still going so well, I probably just put him into top gear a little soon.

“Once I got upsides Ryan [Moore, on Stone Age] I was able to take a little breath at the two-pole and let him kick on, and he did everything beautifully. He was a bit more push-button today [than Dante]. He was a lot more alert through the race. Everything I asked of him I got pretty much straight away.”

Stoute kept his cards close to his chest when asked where Desert Crown heads next, but this certainly isn’t the last we have seen of the colt, who won the Derby on just his third outing, at the very top level this season — with l’Arc de Triomphe a potential target later in the season, while the veteran trainer feels he might also be suited to 10 furlongs as well as 12.

Certainly, one to put in your tracker if you haven’t already done so!

Allari Naresh says his best is yet to come

How Did David Andersson Die? Know The Death Cause & Obituary Details