Becky Robbins was born Rebecca Jenkins. She is a philanthropist, as well as an author. She got famous after she got married to Tony Robbins. Before getting married to the famous motivational speaker, coach, philanthropist, and author, she was just an average woman in the United States. Her ex-husband is famous for his books, seminars, and infomercials that have empowered a lot of his audience over the years. 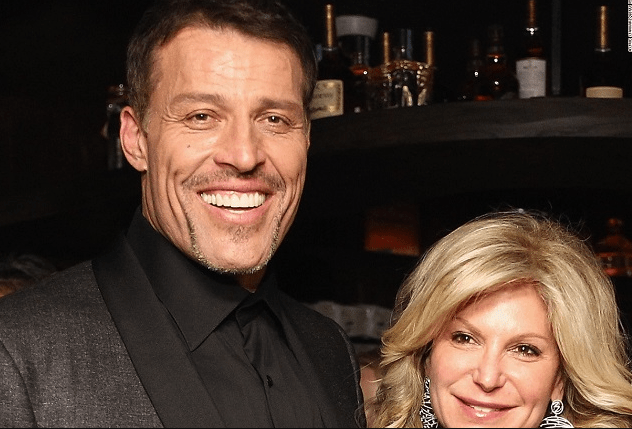 Becky always loved medicine. Due to her love for medicine and the fact that she is from a family that loves education, she ended up as a qualified nurse. Although she studied nursing because of her love for medicine, she soon realized that she did not like medicine as much as she thought. What she loved were anatomy and biology. After practicing nursing for a while, Becky decided to do a bit of business.

Becky Robbins might be famous for getting married to Tony Robbins. Nonetheless, her marriage to the famous motivational speaker was not her first. Her initial marriage happened when she was 18 years. Members of the public, however, do not know who her first husband is. Her first marriage produced three children. A girl and two boys. This marriage, however, lasted only a short time.

After her first marriage came to an end, Becky lived as a single mother. This, however, was not for a very long time before she met Tony Robbins.

Becky met Tony Robbins in one of the many seminars he spoke in. This happened when tony was 24 and was holding a three-day seminar that he titled ‘Unleashing the Power Within’. In this seminar, Becky sat at the front and was able to catch Tony’s eyes. He then decided to talk with her when the event ended. After talking for a while, they became friends and ended up dating. This was followed by marriage. Tony and Becky got married in 1982 and they have a daughter together.

At the beginning of their marriage, everything looked perfect. Things, however, began getting bad because of the gradual introduction of infidelity to their marriage. Anthony Robbins started dating his ex and this led to the birth of a boy. It seemed like Becky was going to cope with infidelity for a while. However, the birth of this child eventually led to the end of the marriage between Becky and Tony.

Life after her Divorce

Tony and Becky might no longer be friends, they, however, still seem to have a good relationship as she has not stopped believing his message. Due to the good professional relationship they have, she has grown to the position vice president of Robbins Research International. Additionally, she has conducted lots of outreaches, done interviews, and written articles for the firm.

While it seems like common knowledge that they have maintained a good professional relationship, no one knows much about her relationship status. It is still unclear if she has gotten involved in fresh relationships or has decided to stay single. Tony, on the other hand, has remarried. He remarried in 2001 and has remained married ever since.

When compared to her ex-husband, Becky Robbins is not very rich. That, however, does not take away the fact that she has been able to achieve a good net worth. She is currently worth more than $1 million. This net worth is a result of her hard work. The place of her association with Tony, however, cannot be overlooked. Becky might be worth about $1 million at the moment. Nonetheless, her net worth is expected to increase significantly.