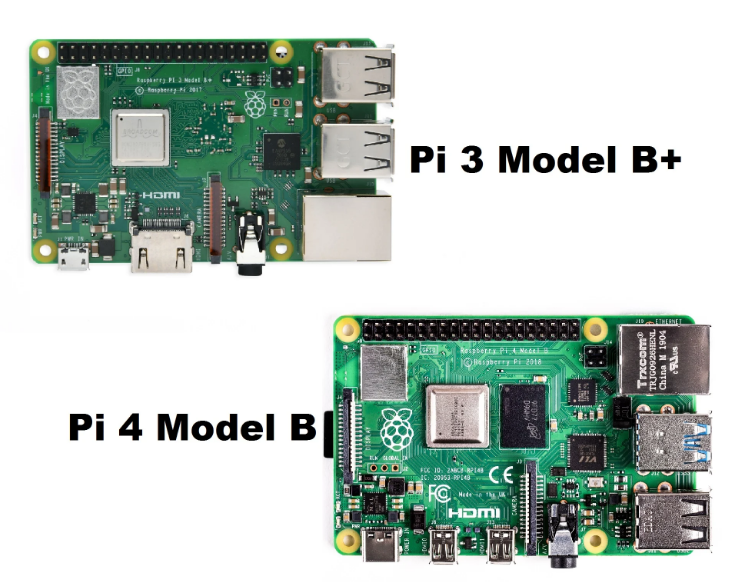 There are three different models of the Raspberry Pi 3 (B, B+ and A+) but only one Raspberry Pi 4 (B). All have a central processing unit, random-access memory (RAM) HDMI ports, USB ports plus Wi-Fi and Bluetooth.

The latest Raspberry Pi 4 model features powerful upgrades and the option of choosing your RAM size- either 1GB, 2GB, 4GB or 8GB. It houses a better CPU and runs at faster speeds (up to 1.5GHz), allowing for increased performance.

You still get four USB ports, but the upgraded function means you benefit from two USB 3.0 ports, enabling you to transfer data quicker and with ease.

Overall, the faster memory and general increase in speed and performance makes the Raspberry Pi 4 a robust, little computer system, capable of completing some fantastic projects.

The main downside to this model upgrade is overheating problems. Due to the higher power and performance, it generates more heat than the Raspberry Pi 3. Although this shouldn’t cause too many fundamental issues, it could mean it doesn’t last quite as long as the previous model.

This version also needs new accessories, such as power supply cables, as well as cases. Although not a huge deal in the long run, this might put some consumers off if they have a complete accessory kit for their Raspberry Pi 3.

The closest model to the Raspberry Pi 4 version is the 3B+. With features similar to the 4, the main differences are a slightly lower spec and the use of USB 2.0 ports instead of 3.0.

Performance and speed are the best of the Raspberry Pi 3 models but it doesn’t have the RAM options like the 4 does.

However, there are currently a wider range of accessories available, and this model comes with a full-sized port compared to the 4’s micro HDMI ports.

Overall, the model you choose will largely depend on your uses and projects. For fast speeds, greater memory and larger builds, the Raspberry Pi 4 might be the best option for you.

If, however, you’re happy to continue coding, creating and using your older model without the need for increased performance, then there are plenty of advantages to sticking with the Raspberry Pi 3 for now.

Red Desert Violin Review – Is It Really Worth It?