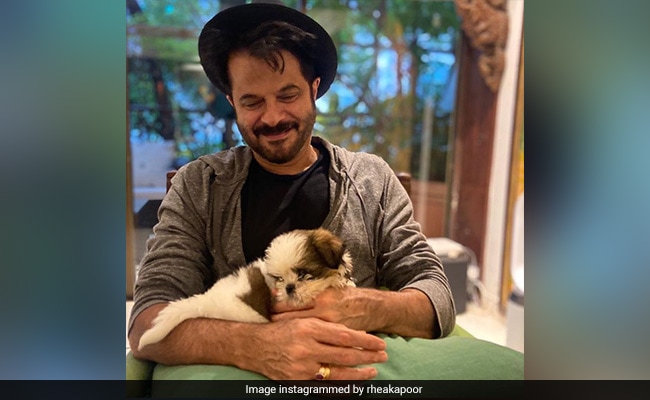 Anil Kapoor’s daughter Rhea Kapoor, on Sunday, introduced the latest addition to their family – a fur baby named Russell Crowe Kapoor. Yes, you read it right. It appears that the Kapoors named their pet pooch after Gladiator actor Russell Crowe. Rhea introduced her fans to the new family members by sharing a bunch of adorable pictures and videos of him. The first photo of the album shows Anil Kapoor holding the fluff-ball in his arms while other videos feature Rhea, her boyfriend Karan Boolani playing with the puppy. Sharing the album, Rhea Kapoor wrote: “We have a new family member. His name is Russell Crowe Kapoor. He is the prince of Juhu. He already runs this house. He is 55 days old and a bundle of love. He got sick the first two days in and scared the shit out of all us, I cried like a baby after months. He is back to top form now. He is everything.”

Anil Kapoor, earlier in the day, shared adorable throwback pictures of himself and daughters Rhea and Sonam Kapoor and wished them on Daughter’s Day like this: “To my pillars of strength! Thank you for making my life beautiful and complete! Seeing you both grow up to be so talented, courageous and brilliant fills me with so much happiness and pride! Love you always! Happy Daughter’s Day!”

In terms of work, Anil Kapoor was last seen in the role of a cop in Malang, which released earlier this year. He has starred in films like Beta, Tezaab, Mr India, Judaai, Lamhe, Laadla, Rishtey and Andaaz among many others. He will next be seen in Bhool Bhulaiyaa 2, in which he will share screen space with Kartik Aaryan. Anil Kapoor also has a film with Varun Dhawan lined-up.