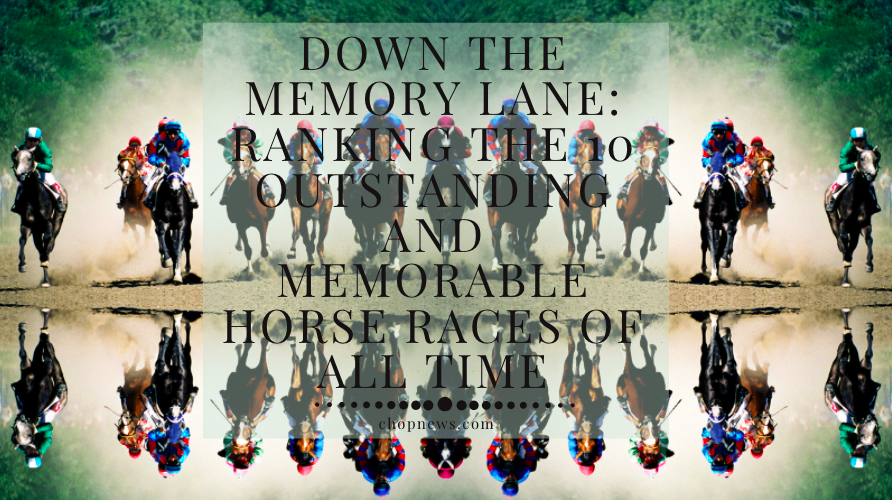 You must have heard the phrase “Great race!” a thousand times a day in betting shops and racecourses. However, what distinguishes the greatest horse race? That’s a difficult question, right?

Well, horse racing has been a famous sport globally for centuries. It is also one of the most popular sports for sports betting fans worldwide for a long time, especially in India, where they can visit https://sportsbetting.net.in/horse-racing/ to get a horse race betting guide and tips.

So, what makes a horse race great?

Great races are the benchmarks of horse racing history. They are the kind of races you don’t expect to see again, but you go back to the stands just in case! Here are the 10 outstanding and memorable horse races of all time based on the criteria mentioned above.

10. Crisp and Red Rum battle in the Grand National

The result of this race is in the record books, but how the race was won is unbelievable. Crisp put in an astounding front-running performance as he jumped flamboyantly to build a considerable lead. As the two horses turn for home at the second-last fence, no one would have put their money on Crisp losing.

Unfortunately for Crisp, fatigue got the better of him, and he slowed down. It is at this moment that Red Rum reeled in just before the winning post to win the first Nationals by three-quarters of a length.

9. Bayakoa and Go For Wand Clash in the Breeders’ Cup Distaff

Go For Wand came into this race on the back of five straight Grade One wins. On the other hand, Bayakoa was regarded as one of the best head-to-heads of American racing history. It did not take long before the two went neck and neck in this race.

Bayakoa pressed upsides all the way, and Go For Wand hugged the rails as the two headed for the home stretch. However, something had to give, and Go For Wand’s front right leg was what gave. She crushed down and was irretrievably injured, turning one of the greatest duels into arguably the most awful. Nevertheless, the race’s great art remains great!

8. Monksfield and Sea Pigeon Duel in the Champion Hurdle

This was a thrombotic race which is also regarded as the greatest race of the hurdling golden age. Monksfiled, having won the Champion Hurdle in 1978, started as the favorite and led all the way. However, he was joined in the last flight by the cruising Sea Pigeon.

The two flew the last hurdle as though they were yoked together. But Sea Pigeon poached a lead, but Monksfield fought back on the stands rail. After a prolonged battle, Monksfield emerged the winner by three-quarters of a length.

7. Affirmed and Alydar head-to-head in the Belmont Stakes

This race was the third head-to-head between the two horses in US Triple Crown races. Affirmed had won against Alydar by 1 length in the Kentucky Derby and in Preakness by a neck. Here, the two locked horns throughout the final mile of Belmont’s 12-furlong.

Alydar seemed to have the upper hand towards the end of the race, but Steve Cauthen invoked a last-minute effort from Affirm, who fought his way back to win the race by a head.

One horse racing trainer suggested that the best thing in racing is when two great horses single themselves out from the others on the field and end up in a long-drawn-out struggle. The two drew clear of Rock Sand, the race’s favorite for an epic encounter which Ard Patrick won by a neck.

This race was marked by sheer heroism from horse and jockey. Mandarin went all out early in the race as Fred Winter was left without brakes or steering. However, their partnership remained intact thanks to a combination of willpower and leg-power.

One of Mandarin’s forelegs broke down with three fences to go, but he dragged on. Lumino, A French horse, launched a late challenge to grab Mandarin at the line, but he won by a head.

4. Secretariat in the Belmont Stakes

Secretariat’s performance is regarded as one of the most outstanding displays of individual equine brilliance. He won the 31-length Belmont race to win the US Triple Crown. The performance was only second to “Eclipse first’s and no other can come close.

3. Arkle and Mill House in the Cheltenham Gold Cup

This epic race is so legendary that there is a song in its honor. The race brought together two young, unbeatable steeplechasers. Moreover, it was a tribal horse as Arkle represented Ireland and Mill House represented England. And, your guess is right- the build-up was intense.

Moreover, the race itself did not disappoint. The two horses put in a flawless display, but Mill House scampered up the hill to win the race with five lengths.

2. Grundy and Bustino in the King Geroge VI and Queen Elizabeth Diamond Stakes

This was the real clash of the generations that was run at blistering speed from the onset. The race ended up becoming a head-to-head, with Grundy taking the advantage and Bustino refusing to concede. Bustino won the race by half a length. The race was later described as one of the most moving, hardest, and most implacable races. It is also referred to as the “Race of the Century.”

1. Quashed and Omaha in the Gold Cup

Quashed enjoyed the lead in the first quarter-mile but the two seemed joined at the hip as they passed the post. With no photo finish or public address, there was a tense moment before the result was announced. Quashed won the race by ahead.

US Portland – About the City & its Popularity